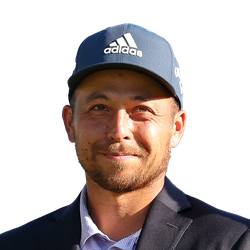 2022–23 Stats
Rank
43
Winnings
$929,515
Winnings/Entry
$232,379
Entries
4
Rounds
13
2022–23 Fantasy Outlook
Schauffele was able to silence all the critics that said he couldn't close with a torrid last few months of the season. He dominated the Zurich Classic with teammate Patrick Cantlay, then added back-to-back victories at the Travelers Championship and Scottish Open to show his game travels everywhere. Schauffele probably has the most complete game all the way through the bag on Tour and that's why he is such a reliable player in any format to get you a great finish. The next logical step for the 28-year-old is to pick up a major championship. He's got nine top-10's and 15 top-20's in 22 just career major starts. Read Past Outlooks
read more
Handedness Right
Status Pro
Height 5'10"
Weight 175 lbs
DOB 10/25/1993
Birthplace La Jolla, California
College San Diego State
Country USA
Read More News
PGA Stats
Loading Golf Stats...
Tournament Results
Scoring
FanDuel
DraftKings
Loading Tournament Log...
PGA Advanced Stats
Loading Advanced Stats...
Recent RotoWire Articles Featuring Xander Schauffele See More
2023 Farmers Insurance Open Betting: Picks, Odds, Predictions and Best Bets
9 days ago
9 days ago
Ryan Pohle lists his favorite wagers of the week and explains why those backing Xander Schauffele could find themselves shuffling come Saturday night.
Yahoo DFS Golf: Farmers Insurance Open Picks and Strategy
9 days ago
9 days ago
Find out why Bryce Danielson believes Alex Smalley will make a big impact in this week's contests on Yahoo.
FanDuel PGA: Farmers Insurance Open Picks and Strategy
9 days ago
9 days ago
This week's course sets up nicely for Taylor Pendrith, and that helps him land a spot among Ryan Andrade's value picks for the latest contests on FanDuel.
Weekly Preview: Farmers Insurance Open
9 days ago
9 days ago
Luke List seems to have Torrey Pines figured out, and Greg Vara suggests giving him a look in a few different formats.
DraftKings PGA: Farmers Insurance Open Picks and Strategy
10 days ago
10 days ago
Take time to smell the roses -- or at least train your eye on Justin Rose, whom according to Len Hochberg will help you taste success in this week's contests on DraftKings.
Past Fantasy Outlooks
2022
2020
2019
2018
2017
2016
Schauffele entered 2020-21 having accomplished just about everything in the world of golf outside of winning a major. As we found out last summer, that wasn't quite true as he added a gold medal to his collection. As great as that win was, he's still 0-fer when it comes to the majors. With so many of his peers picking up their first majors the last few years, it's easy to imagine that he's really feeling the pressure now. HIs game is unquestioned, he's one of the best 10 golfers in the world right now and a major should just be a matter of time, but the longer he goes without one, the more difficult it will become. Expect Schauffele to produce at a high-level once again this season and perhaps get that elusive major.
Schauffele has been incredibly consistent in his short time on the PGA Tour. He's topped $4 million in earnings in each of his first four seasons on the PGA Tour and yet, he seems to be leaving something on the table each season. Schauffele has four wins already and six runner-ups in just four seasons and there's little doubt that he's going to produce at a high-level for many years to come. One of these years he's going to really bust out and at his current price, he's worth a long look in salary cap formats because this could be the year.
Schauffele again showed what he's capable of this past season and he again hinted at what he could be. He's already a top-10 golfer, but there are signs that he could be more. He continues to show well during the biggest events, but he's had trouble closing the deal. Schauffele will continue to improve this season and maybe even close the deal at a major. His number is still a bit too high for salary cap purposes.
Schauffele is nothing if not consistent. Schauffele surprised the golf world by topping $4 million during his rookie season and he followed that up with another $4 million season in his second year on the PGA Tour. The only difference in the two seasons was the way he went about making that money. In his first season, he picked-up two victories, one of which came at the Tour Championship. In his second season, he failed to win, but he had more high-end finishes that he did in his rookie season and he was generally more consistent. It's certainly a good sign that Schauffele has proved he can find success in different ways, but there's no way to know if he can significantly improve upon the $4 million number. As such, Schauffele carries a lot of risk entering this season for salary cap purposes.
Schauffele wasn't even on the radar when the 2016-17 season began. He posted a top-5 during the fall portion of the season, but proceeded to miss four of his first five cuts in 2017. Everything started to click at the U.S. Open though as he posted another top-5 at Erin Hills. A few weeks later, he won the Greenbrier Classic and the entire complexion of his season changed. Schauffele scrambled on the back-nine at the BMW just to make the Tour Championship and he parlayed that into another win. In total, it was an amazing rookie season for Schauffele and while he appears to have a lot of talent, he set the bar awfully high last season, which makes him tough to pick in a salary cap format.
Schauffele, 26th on the regular-season Web.com Tour money list to miss a tour card that way by one spot, gathered himself and went T50-T18-T9 in the playoffs, clinching a spot on the PGA Tour and giving himself a nice sigh of relief. He's playing well and could hop up on a leaderboard this fall, as he was T12 in GIR and T15 in putts per GIR in Columbus.
More Fantasy News