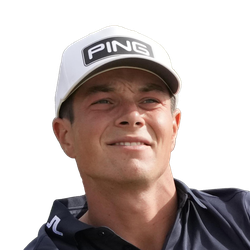 2022–23 Stats
Rank
48
Winnings
$940,430
Winnings/Entry
$235,108
Entries
4
Rounds
16
2022–23 Fantasy Outlook
Hovland has been a top-five ball-striker in the world since he started on Tour three years ago. The one thing that will continue to stand out until changes are made is his short game. It was really bad this past season, as he lost over 0.65 strokes per round, which ranked 191st on the PGA Tour. Hovland's putter has gone from a weakness to a stregnth now, so if he can find a way to just not be terrible around the greens then his results will be very scary. Hovland has won in all three seasons and has only missed seven cuts in that timespan. His T4 finish at the Open Championship after fading on Sunday is his only top-10 finish in a major to this point, however. Hovland's ball-striking makes his floor very high, but his ceiling is still a question until he can figure out the short game. Read Past Outlooks
read more
Handedness Right
Status Pro
Height 5'10"
DOB 9/18/1997
College Oklahoma State
Country Norway
Read More News
PGA Stats
Loading Golf Stats...
Tournament Results
Scoring
FanDuel
DraftKings
Loading Tournament Log...
PGA Advanced Stats
Loading Advanced Stats...
Recent RotoWire Articles Featuring Viktor Hovland See More
Yahoo DFS Golf: AT&T Pebble Beach Pro-Am Picks and Strategy
Yesterday
Yesterday
Joseph Bramlett has been dialed in of late, and that lands him a spot among Bryce Danielson's golfers to go after in this week's contests on Yahoo.
Weekly Preview: AT&T Pebble Beach Pro-Am
Yesterday
Yesterday
Joel Dahmen has not teed it up in a while, but Greg Vara still suggests using him in a number of different formats this week.
FanDuel PGA: AT&T Pebble Beach Pro-Am Picks and Strategy
2 days ago
2 days ago
Kevin Streelman usually fares well in this event, and for that reason Ryan Andrade believes he will be a bargain in this week's contests on FanDuel.
DraftKings PGA: AT&T Pebble Beach Pro-Am Picks and Strategy
2 days ago
2 days ago
Matt Fitzpatrick is the favorite in this week's event, and that's not the only reason why he finds himself among Len Hochberg's picks to click in the latest contests on DraftKings.
RotoWire Staff/Expert League Results
15 days ago
15 days ago
Rory McIlroy was the most expensive player in the annual RotoWire staff golf league over Jon Rahm and Scottie Scheffler in a format that gives a guide for season-long leagues.
Past Fantasy Outlooks
2022
2020
2019
There's never been a shortage of hype surrounding Hovland and while he's been a solid player on the PGA Tour since day one, entering his second full season on tour, he'd yet to really show what he had. Sure, he won the Puerto Rico Open as a rookie, but he didn't splash like many expected ... until 2020-21. Hovland not only picked up another win in year-two, but he added two runner-ups and two 3rd-place finishes on his way to more than $5 million. The jump to the $5 million club was quick, after all, the 2020-21 season was just his second on the PGA Tour and although the bar was set high, Hovland has the game to take it even higher. Considering his number for this season, Hovland can't be considered a great salary cap play, but he's definitely in the "good" camp.
Many young players on the PGA Tour struggle with consistency, but that's never been the issue for Hovland. Hovland has finished inside the top 25 in half of his 24 starts as a professional on the PGA Tour. He also picked-up his first win on the PGA Tour this past season and while that win came against a weaker field, the "real" wins are coming. Hovland's cap number is not discounted much from the shortened season, but he's still a bargain at his current price.
Hovland doesn't need much of an introduction after a T12 at the U.S. Open in June preceded four consecutive finishes of T16 or better to end the regular season, culminating with a solo-fourth at the Wyndham Championship. The Oklahoma State product failed to record a win like his fellow Class of '19 compadres, Matthew Wolff and Collin Morikawa, but expect Hovland to land in the winner's circle soon enough. He gained at least 8.4 strokes from tee to green throughout his last three starts on the PGA Tour before securing his card with results of T11-T2 at the Korn Ferry Tour Finals.
More Fantasy News