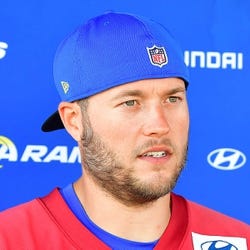 Out
Injury Neck
Est. Return 12/4/2022
Fri Practice: DNP
2022 Pass/Rush Stats
YDS
2087
TD
10
INT
8
YDS
9
TD
1
Rest-of-Season Projections
YDS
TD
INT
YDS
TD
Unlock Our Projections
2022 Fantasy Outlook
The handsome price paid to acquire Stafford last season proved more than worth it as he led the Rams to a Super Bowl title. He was asked to do what Jared Goff could not - stretch the field and make big plays. Stafford engineered an offense that led the league with 18 plays of 40-plus yards while ranking third in YPA at 8.1, the second most of his career. Stafford tied a career high with 41 TD passes (2nd) to finish QB6 in fantasy, his highest mark in a decade. He wasn't terribly efficient - he led the league with 17 interceptions, nine of which came on attempts of 20-plus yards where he ranked 18th in on-target percentage (46.6 percent). Stafford's intermediate passing, though, helped turn Cooper Kupp into an MVP candidate and delivered plenty of big plays. On attempts of 10-19 yards, Stafford had 10 TD passes and no interceptions, leading the league in passer rating (126.0). A healthy Cam Akers could help the short passing game this season, and while Robert Woods was traded and Odell Beckham likely is out until November with an ACL injury (should he re-sign), the WR corps remains stellar with Allen Robinson joining Kupp and Van Jefferson, in addition to reliable TE Tyler Higbee. Stafford adds nothing on the ground, but he has enough passing-game opportunity in Sean McVay's explosive offense to be a fantasy starter again. Read Past Outlooks
read more
RANKS
#100.11
ADP
#

QBLos Angeles Rams
Read More News
NFL Stats
Loading NFL Stats...
Fantasy/Red Zone Stats
See red zone opportunities inside the 20, 10 and 5-yard lines along with the percentage of time they converted the opportunity into a touchdown.
Loading Fantasy/Red Zone Stats...
Advanced NFL Stats
How do Matthew Stafford's 2022 advanced stats compare to other quarterbacks?
This section compares his advanced stats with players at the same position. The bar represents the player's percentile rank. For example, if the bar is halfway across, then the player falls into the 50th percentile for that metric and it would be considered average. The longer the bar, the better it is for the player.
Bad Pass %
21.5%
Avg Target Depth
6.4 Yds
Sack Rate
8.7%
Avg Receiver YAC
5.5 Yds
Receiver Drop %
3.3%
Loading Advanced NFL Stats...
2022
2021
2020
2019
2018
2017
2016
2022 NFL Game Log

Rams
View Full Depth Chart
This Week's Opposing Pass Defense
How does the Chiefs pass defense compare to other NFL teams this season?
The bars represents the team's percentile rank (based on QB Rating Against). The longer the bar, the better their pass defense is. The team and position group ratings only include players that are currently on the roster and not on injured reserve. The list of players in the table only includes defenders with at least 3 attempts against them.