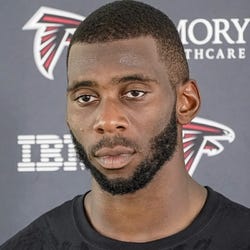 IR
Injury Knee - MCL
Est. Return 1/1/2023
2022 Receiving Stats
REC
28
YDS
356
TD
2
AVG
12.7
TAR
59
Rest-of-Season Projections
REC
YDS
TD
AVG
TAR
Unlock Our Projections
2022 Fantasy Outlook
Billed as a generational talent out of Florida last season, Pitts was drafted fourth overall and made an instant impact as one of only three tight ends in the league to eclipse 1,000 receiving yards, ranking second all-time among rookie tight ends with 1,026. That’s an impressive rookie season at a position that usually has a steep learning curve, but the notable shortfall in Pitts’ production was a lack of red-zone success, as he found the end zone once on 15 targets inside the 20. With Calvin Ridley suspended this season and Russell Gage (94 targets) off to Tampa Bay, Pitts likely will be the primary target for new quarterbacks Marcus Mariota and rookie Desmond Ridder, even after the team drafted wide receiver Drake London eighth overall this year. The 6-4 London, a former USC basketball player, is considered an elite red-zone target, but that could work in Pitts' favor as defenses can’t double team both players near the goal line. A second-year leap for Pitts in the touchdown department is probable given the recent history of highly drafted tight ends. Six others were selected in the first half of the first round since 2000; those players averaged 1.5 touchdowns as rookies and 4.8 touchdowns in their second seasons. Even in what should be a subpar Falcons offense, Pitts is a strong bet to improve on his rookie-year numbers. Read Past Outlooks
read more
RANKS
#33.55
ADP
#

TEAtlanta Falcons
Read More News
NFL Stats
Loading NFL Stats...
Fantasy/Red Zone Stats
See red zone opportunities inside the 20, 10 and 5-yard lines along with the percentage of time they converted the opportunity into a touchdown.
Loading Fantasy/Red Zone Stats...
Advanced NFL Stats
How do Kyle Pitts' 2022 advanced stats compare to other tight ends?
This section compares his advanced stats with players at the same position. The bar represents the player's percentile rank. For example, if the bar is halfway across, then the player falls into the 50th percentile for that metric and it would be considered average. The longer the bar, the better it is for the player.
Air Yards Per Game
75.3
Air Yards Per Snap
1.81
% Team Air Yards
31.6%
% Team Targets
24.0%
Avg Depth of Target
13.0 Yds
Catch Rate
47.5%
Drop Rate
1.7%
Avg Yds After Catch
4.9
% Targeted On Route
28.5%
Avg Yds Per Route Run
1.72
Loading Advanced NFL Stats...
2022
2021
2022 NFL Game Log

Falcons
View Full Depth Chart
How often does Kyle Pitts run a route when on the field for a pass play?
This data will let you see how Kyle Pitts and the other tight ends for the Falcons are being used. Some tight ends may have a lot of snaps, but they're not that useful for fantasy purposes because they're not actually running routes. This data will help you see when this is the case.
Kyle Pitts
207 routes   59 targets
← More Blocking
% Routes Run
More Receiving →
50%
Anthony Firkser
28 routes   4 targets
60%
Feleipe Franks
16 routes   2 targets
37%
Parker Hesse
74 routes   6 targets
19%
MyCole Pruitt
17 routes   4 targets
15%
Receiving Alignment Breakdown
See where Kyle Pitts lined up on the field and how he performed at each spot.
Detailed
Grouped
Side
Loading Alignment Breakdown...
Loading Alignment Breakdown...
Loading Alignment Breakdown...
Loading Team Alignment Breakdown...
This Week's Opposing Pass Defense
How does the Commanders pass defense compare to other NFL teams this season?
The bars represents the team's percentile rank (based on QB Rating Against). The longer the bar, the better their pass defense is. The team and position group ratings only include players that are currently on the roster and not on injured reserve. The list of players in the table only includes defenders with at least 3 attempts against them.

@ Commanders
Sunday, Nov 27th at 1:00PM
Overall QB Rating Against
74.8
Cornerbacks
69.6
Safeties
85.7
Linebackers
81.8
Loading Opponent Pass Defense Stats...
2022 Kyle Pitts Split Stats
Loading NFL Split Stats...
Measurables Review View College Player Page
How do Kyle Pitts' measurables compare to other tight ends?
This section compares his draft workout metrics with players at the same position. The bar represents the player's percentile rank. For example, if the bar is halfway across, then the player falls into the 50th percentile for that metric and it would be considered average.
* All metrics are from his Pro Day (not the combine).
Height
6' 6"
Weight
246 lbs
40-Yard Dash
4.44 sec
Vertical Jump
33.5 in
Broad Jump
129 in
Bench Press
22 reps
Hand Length
10.63 in
Arm Length
33.50 in
Recent RotoWire Articles Featuring Kyle Pitts
NFL Game Previews: Week 12 Matchups
4 days ago
4 days ago
Erik Siegrist previews the Week 12 slate as Jalen Hurts and the Eagles look to crank it up against the Packers on Sunday night.
Beating the Book: Seahawks Win at Home, Ravens Handle Jags + Full Week 12 ATS Picks and Predictions
4 days ago
4 days ago
Nick Whalen surveys the board and makes his picks and score predictions for all 16 NFL games in Week 12.
Exploiting the Matchups: Week 12 Start/Sit and Streamers
4 days ago
4 days ago
Keenan Allen nearly breached 100 yards in his first game back and now gets a favorable matchup with Arizona. Plus, that's not the only slot matchup Jerry Donabedian likes this week.
Target Breakdown: Week 11 WR/TE Usage & Week 12 Waivers Preview
5 days ago
5 days ago
Rookie wide receivers Treylon Burks and Wan'Dale Robinson reached 100 yards for the first time, but only Burks will have the opportunity to build on his breakout performance.
Weekly Rankings: Week 12 Value Meter
5 days ago
5 days ago
Are Mike Evans and the Bucs back? They have a reasonably good matchup against the Browns this week.
2021 Fantasy Outlook
The term "generational prospect" is thrown around too often, but Pitts is the rare case where few argue with that assessment. His 43-770-12 receiving line in an eight-game junior season at Florida was as good as it gets in terms of per-game production from a tight end, a position where even the future NFL stars don't always put up big numbers in college. Pitts also had an impressive sophomore year that included a team-high 54 receptions, and his pro day workout surpassed even the lofty expectations. At 6-6, 245, Pitts put up the fastest 40 time (4.44 seconds) and broad jump (129 inches) among tight ends in this year's draft class. The Falcons saw enough to take him fourth overall, arguably passing up their best chance to find Matt Ryan's successor. Regardless of how that works out from a franchise standpoint, it means Pitts will start his career catching passes from a veteran QB who has a 10-year streak topping 4,000 passing yards, with an average of 4,571 in that stretch. Hayden Hurst still might be the nominal Week 1 starter, but his disappointing 2020 opens the door for Pitts to be Atlanta's top pass catcher at tight end, a role that should come with steady targets after the team traded Julio Jones to Tennessee. While avoiding rookie tight ends might be a good rule in general, a prospect like Pitts is the reason we leave room for exceptions.
More Fantasy News