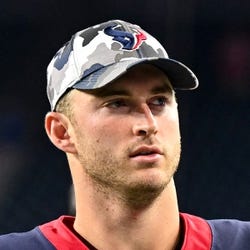 2022 Pass/Rush Stats
YDS
2144
TD
11
INT
11
YDS
38
TD
1
Rest-of-Season Projections
YDS
TD
INT
YDS
TD
Unlock Our Projections
2022 Fantasy Outlook
A 2021 third-round pick, Mills replaced an injured Tyrod Taylor early in the year before finally taking over the starting job for good. Mills struggled with efficiency - 23rd in on-target percentage (72.8) and 25th in YPA (6.8) - but he improved late in the season, posting 9/2 TD/INT and 7.4 YPA in his last five games. At 6-4, 225, Mills does not have an elite arm, but he fared well throwing deep (11th in both on-target and completion rates on 20-plus-yard attempts). He wasn't a running threat, however, and the Texans didn't have consistent pass catchers besides Brandin Cooks. The situation is similar this season, as the Texans added only second- round pick John Metchie, coming off an ACL injury and recovering from leukemia (he's not expected to play this year). They also signed RB Marlon Mack and drafted Dameon Pierce in Round 4, adding quantity if not quality to the running game. Perhaps a revamped scheme under Pep Hamilton, last year's QB coach now promoted to OC, will work in Mills' favor, but without rushing skills and surrounded by a poor roster, his fantasy outlook is limited. Read Past Outlooks
read more
RANKS
#181.98
ADP
#

QBHouston Texans
Read More News
NFL Stats
Loading NFL Stats...
Fantasy/Red Zone Stats
See red zone opportunities inside the 20, 10 and 5-yard lines along with the percentage of time they converted the opportunity into a touchdown.
Loading Fantasy/Red Zone Stats...
Advanced NFL Stats
How do Davis Mills' 2022 advanced stats compare to other quarterbacks?
This section compares his advanced stats with players at the same position. The bar represents the player's percentile rank. For example, if the bar is halfway across, then the player falls into the 50th percentile for that metric and it would be considered average. The longer the bar, the better it is for the player.
Bad Pass %
22.9%
Avg Target Depth
7.8 Yds
Sack Rate
7.9%
Avg Receiver YAC
5.6 Yds
Receiver Drop %
4.9%
Loading Advanced NFL Stats...
2022
2021
2022 NFL Game Log

Texans
View Full Depth Chart
This Week's Opposing Pass Defense
How does the Dolphins pass defense compare to other NFL teams this season?
The bars represents the team's percentile rank (based on QB Rating Against). The longer the bar, the better their pass defense is. The team and position group ratings only include players that are currently on the roster and not on injured reserve. The list of players in the table only includes defenders with at least 3 attempts against them.

@ Dolphins
Sunday, Nov 27th at 1:00PM
Overall QB Rating Against
96.5
Cornerbacks
87.2
Safeties
85.6
Linebackers
126.8
Loading Opponent Pass Defense Stats...
2022 Davis Mills Split Stats
Loading NFL Split Stats...
Measurables Review View College Player Page
How do Davis Mills' measurables compare to other quarterbacks?
This section compares his draft workout metrics with players at the same position. The bar represents the player's percentile rank. For example, if the bar is halfway across, then the player falls into the 50th percentile for that metric and it would be considered average.
* All metrics are from his Pro Day (not the combine).
Height
6' 4"
Weight
225 lbs
40-Yard Dash
4.81 sec
Shuttle Time
4.40 sec
Cone Drill
6.95 sec
Vertical Jump
32.0 in
Broad Jump
110 in
Hand Length
9.50 in
Arm Length
31.38 in
Recent RotoWire Articles Featuring Davis Mills
NFL Game Previews: Week 12 Matchups
4 days ago
4 days ago
Erik Siegrist previews the Week 12 slate as Jalen Hurts and the Eagles look to crank it up against the Packers on Sunday night.
Beating the Book: Seahawks Win at Home, Ravens Handle Jags + Full Week 12 ATS Picks and Predictions
4 days ago
4 days ago
Nick Whalen surveys the board and makes his picks and score predictions for all 16 NFL games in Week 12.
Weekly Rankings: Week 12 Value Meter
5 days ago
5 days ago
Are Mike Evans and the Bucs back? They have a reasonably good matchup against the Browns this week.
Backfield Breakdown: Week 11 Running Back Usage & Week 12 Waivers Preview
6 days ago
6 days ago
Samaje Perine scored three touchdowns with Joe Mixon entering concussion protocol. Elsewhere, Najee Harris and David Montgomery returned
NFL Game Previews: 49ers-Cardinals Matchup
10 days ago
10 days ago
Erik Siegrist previews the Monday night game as Jimmy Garoppolo and the 49ers face the division-rival Cardinals in Mexico City.
2021 Fantasy Outlook
Mills was selected in the third round of the 2021 draft and it's no surprise the Texans took a quarterback, as the organization suddenly faces uncertainty at a position that once appeared set for the next decade. The Stanford product's maturation as a pro could take some time due to limited experience. His first two years with the Cardinal were capped due to injuries, and he started just 11 games over the last two seasons. With Deshaun Watson's future with the team cloudy, Tyrod Taylor could well take over as the starter to start the coming campaign, with Mills potentially getting a look by midseason. The Texans need to determine if he's their signal caller of the future, or if they'll go QB hunting in the first round of the 2022 draft.
More Fantasy News