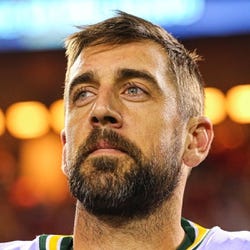 2022 Pass/Rush Stats
YDS
2542
TD
19
INT
7
YDS
64
TD
0
Rest-of-Season Projections
YDS
TD
INT
YDS
TD
Unlock Our Projections
2022 Fantasy Outlook
Last season was filled with drama for Rodgers, but it ended the same way as the previous year — as NFL MVP. He lost 11 TD passes from the previous season in part because of predictable regression in red-zone scores, while his 68.9 completion percentage (3rd) and 7.7 YPA (6th) were only slightly off his 2020 pace. He also took his ability to protect the football to even greater heights. After throwing two interceptions in Week 1, he had just two more the rest of the season. Rodgers put to rest the question of where he’d play this year by signing a contract extension in March. But days later, he lost his best offensive weapon, wide receiver Davante Adams, and then field-stretcher Marquez Valdes-Scantling. If the quarterback makes the receiver, then Rodgers will be fine. But the WR room is devoid of high-end talent and the team waited until its third draft pick to add a wideout — Christian Watson, a 6-4 receiver with 4.36 speed. Otherwise, it's Allen Lazard, Sammy Watkins, Randall Cobb, Amari Rodgers and fourth-round pick Romeo Doubs at wide receiver, plus TEs Robert Tonyan and Josiah Deguara. Running backs Aaron Jones and AJ Dillon, who combined for 86 catches last season, look poised for a lot of work. Rodgers' TDs could dip again without his best goal-line target, and with no clear go-to WR — let alone the QB-WR mind meld Rodgers had with Adams — his 18th season could be bumpier than the last two years. Read Past Outlooks
read more
RANKS
#103.56
ADP
#

QBGreen Bay Packers
Read More News
NFL Stats
Loading NFL Stats...
Fantasy/Red Zone Stats
See red zone opportunities inside the 20, 10 and 5-yard lines along with the percentage of time they converted the opportunity into a touchdown.
Loading Fantasy/Red Zone Stats...
Advanced NFL Stats
How do Aaron Rodgers' 2022 advanced stats compare to other quarterbacks?
This section compares his advanced stats with players at the same position. The bar represents the player's percentile rank. For example, if the bar is halfway across, then the player falls into the 50th percentile for that metric and it would be considered average. The longer the bar, the better it is for the player.
Bad Pass %
17.5%
Avg Target Depth
8.0 Yds
Sack Rate
5.3%
Avg Receiver YAC
5.7 Yds
Receiver Drop %
5.8%
Loading Advanced NFL Stats...
2022
2021
2020
2019
2018
2017
2016
2022 NFL Game Log

Packers
View Full Depth Chart
This Week's Opposing Pass Defense
How does the Eagles pass defense compare to other NFL teams this season?
The bars represents the team's percentile rank (based on QB Rating Against). The longer the bar, the better their pass defense is. The team and position group ratings only include players that are currently on the roster and not on injured reserve. The list of players in the table only includes defenders with at least 3 attempts against them.