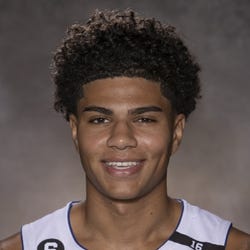 2022 Stats
PTS
6.7
REB
2.7
AST
4.2
STL
1.0
BLK
0.4
ROS Projections
PTS
REB
AST
STL
BLK
Unlock Our Projections
2022 Fantasy Outlook
Hayes' second season was just as much of a mixed bag as his first, though he did make some meaningful improvements. What we know for sure is that he has talent as a passer and defender - 6.1 assists, 1.7 steals and 0.8 blocks per 36 minutes. But his inefficiency as a scorer is hurting his ability to fully develop as a playmaker, and it keeps him off the court when his defense could be of use more often. Hayes' shooting splits of 38/26/77 resulted in just 0.93 points per shot attempt - in the 12th percentile for point guards. It's especially concerning that his three-ball won't fall since they're nearly all catch-and-shoot looks, with 93 percent of his threes being assisted. One positive note in regards to his offense, however, is his improvement as a finisher around the basket. As a percentage of his overall attempts, he took seven percent more shots at the rim, and he converted those at a 61 percent clip - a massive improvement from his 39 percent as a rookie. He also maintained proficiency from floater range, hitting 40 percent of his 133 attempts from between 4-14 feet. Plus, he drew more shooting fouls, taking 1.6 free throws per 36 minutes compared to his rookie mark of 0.9. That rate is still extremely low, but we shouldn't gloss over progress. Hayes is still quite young (hardly 21 years old), but he needs to start making progress fast. The Pistons drafted Jaden Ivey - another guard - with the No. 5 overall pick. And while developing Hayes still has organizational importance, there will still likely be pressure to also play Cory Joseph, Alec Burks, Rodney McGruder and Hamidou Diallo. It's risky to draft Hayes in standard leagues. He ranked 190th in per-game production last season. If you're a believer and need some extra assists and steals, it's justifiable with a final pick. But at this point, Hayes still remains a better option for deeper leagues and keeper/dynasty formats. Read Past Outlooks
read more
Height 6'5"
Weight 195
DOB 7/27/2001
College France
Drafted 1st Rd, #7 in 2020
$Signed a two-year, $10.88 million contract with the Pistons in November of 2020. Pistons exercised $5.84 million team option for 2022-23 in October of 2021. Pistons exercised $7.41 million team option for 2023-24 in September of 2022.
Personal Bio/PreCareer Summary

Hayes was born July 27, 2001 in Lakeland, Florida, but grew up in France. His father, an American, is DeRon Hayes, who played college basketball for Penn State. DeRon played professionally in multiple countries, including France, where Killian grew up and played professionally himself. Hayes' mother, Sandrine, is a native of Cholet, France. Hayes debuted for Cholet's under-21 team, Espoirs Cholet, in the 2016-17 season at age 16. In the LNB Espoirs, the tall guard was often competing against opponents who were five years older. In his second Espoirs season, he was named MVP of the regular season. The left-handed Hayes then signed a three-year deal with ratiopharm Ulm of the Basketball Bundesliga (BBL), the top league in Germany. After one year with Ulm, Hayes declared for the 2020 NBA Draft. Prior to the NBA, Hayes began playing professionally in France. In 2017, he won MVP of the U16 Euro Championship A. During the 2017-18 season with Espoirs Cholet and Cholet Basket, the guard averaged 13.5 points, 5.9 assists, 3.4 rebounds and 2.1 steals in 25.6 minutes. He also was selected to the 2018 U17 World Cup All-Tournament Team. The following season, Hayes remained with Cholet Basket and averaged 7.1 points, 3.1 assists and 2.3 rebounds in 19.7 minutes. During his final campaign overseas, Hayes played for Ratiopharm Ulm in Germany. He averaged 11.6 points, 5.4 assists, 2.8 rebounds and 1.5 steals in 24.8 minutes. Arguably Hayes' best performance in 2019-20 was Nov. 17 in a win over Brose Baskets Bamberg, where he recorded 24 points (9-13 FG, 2-3 3Pt, 4-4 FT), five assists, three steals, two rebounds and one block in 30 minutes.

GDetroit Pistons
See All NBA Rumors
Past Fantasy Outlooks
2021
2020
During his first season in the NBA, Hayes appeared in 26 contests and posted 6.8 points, 5.3 assists, 2.7 rebounds and 1.0 steals across 25.8 minutes per game. The rookie played 30-plus minutes eight times and averaged 12.4 points, 5.9 assists and 3.3 rebounds during those contests. In his second season, Hayes will be the de facto starting point guard and should garner a bigger workload if he can build upon his promising rookie season. He will likely share the majority of the playmaking duties with No. 1 overall pick Cade Cunningham. Detroit elected to re-sign veteran Cory Joseph and 22-year-old Saben Lee to multi-year contracts this offseason, but they won't threaten Hayes' potential unless he starts to regress. While Hayes has displayed promising traits, the biggest cause for concern has been his scoring ability in the NBA. Operating as one of Detroit's go-to players last year, the 6-foot-5 guard attempted 7.7 shots per game -- 2.8 of which were threes -- and only shot 35.3 percent from the field and 27.8 percent from distance. If he can become a reliable scorer, his potential is through the roof. Hayes is worth a flier, but expectations should be tempered until he becomes a more efficient scorer at the NBA level.
Hayes has played professionally overseas during the past three seasons, averaging 11.6 points, 5.4 assists, 2.8 rebounds and 1.5 steals last year with Ratiopharm Ulm in Germany. The 6-foot-5 lefty guard is primarily a playmaker who is great in the pick-and-roll. At 215 pounds, he can also use his size to outmuscle smaller defenders. The initial concern for Hayes will be his struggles from beyond the arc, as he shot only 29.4 percent last season. He's also not an elite athlete and isn't an especially strong defender. Still, Hayes should be expected to be a focal point of the Pistons' rebuild and should have plenty of opportunities on the court. It wouldn't be surprising if he saw near 30 minutes per game, though he'll have to initially compete with Derrick Rose for playing time.
More Fantasy News